A clinical Everton inflicted Manchester United sixth defeat in their last eight games in a four goal show that saw Marco Silva’s men climb to seventh in the Premier League table with three games of the season remaining.

Ampted up by the whirring of the Goodison sirens once again, those in a royal blue jersey responded to the couldrenlike atmosphere inside Goodison Park with the progressive, attack minded football that produced consecutive home wins against other top six opposition, Chelsea and Arsenal. Richarlion fired an early warning shot that stung the gloves of David De Gea from an early Everton corner, and within a matter of minutes a routine long throw from Lucas Digne into the Man United penalty area- flicked on by Dominc Calvert-Lewin, Richarlison tore a page from the skillbook of fellow countryman Pele, with an acrobatic overhead kick that flew into the roof of the net thirteen minutes in.

Such a tenatious effort in the opening quarter of the game, set the tone for the rest of the afternoon for the home side as concern grew for Ole Gunnar Solskjaer. A poor corner from Marcus Rashford was cleared at the near post resulting in an exchange of posession between Bernard and Idrissa Gueye on the transition to the counter-attack. The industrius Gueye put in another tireless performance both off and on the ball, his decision making boded well for him as he found Gylfi Sigurdsson in space with yet plenty of work still to do. Sigurdsson, who alongside Gueye was in contention for the man of the match award, showed his brilliance when it comes to operating outside the box. Working the ball within 25 yards from goal, the lack of a United press led to Everton’s number 10 unleasing a typical rocket which bounced beyond the grasp of the goalkeeper, putting Everton two up by the half time whistle.

The best goal of the Easter Sunday clash however, was yet to be scored. Each goal impressivley better than the last, it was the turn of Lucas Digne to remind the world of his wand of a left foot. Punching clear from a Sigurdsson corner, De Gea could do nothing as Digne caught the ball sweetly on the half volley outside the box, coming across his body, missiling into the bottom left and lifting the Gwladys Street net off its hinges.

At this point, the performance, scoreline and nature of the goals ensured this would be a game to remeber for Evertonians, the day nearly all the more memorable as Sigurdsson quite literally nearly scored directly from the corner had it not been for the scrambling leg of De Gea. Sigurdsson, who had many would argue his finest game for Everton, topped off the marvelous performance with an assist, feeding subsitiute Theo Walcott into acres of space who took one touch to set himself and another to finish neatly into the bottom right. Rampant, decisive & convincing, Everton ran out comfortable 4-0 winners. 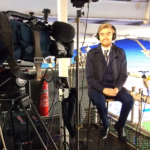