No wins since the end of September for Everton, so there’s nothing like getting back to winning ways with a trip to Man City. That’ll do the confidence for the players, manager and fans alike the world of good, won’t it?

Everton, still without the spine of the side, lined up with the same team that drew to Spurs two weeks ago. The worrying thing is that this is the strongest team we’ve got at the moment, and whilst we’re not going to get relegated, or at least I hope we won’t, we’re still miles away from where we need to be, and where the fans, sometimes wishfully, expect us to be.

City, on the other hand, had nineteen-year-old Cole Palmer upfront whilst Everton had eighteen-year-old Tyler Onyango, and twenty-year-old Ellis Simms on the bench, doing nothing. They can’t be any worse than what we’ve got at the moment, but Benitez mustn’t think they’re ready and is a clear indication as to the lack of squad depth we’ve got. Worrying.

I think every Everton fan going to the match was near enough certain that we’d get beat, just by how much was the real question. It sounds all very negative, and we are, because the team are, the way the manager sets them up, the way they approach the game is all very pedestrian-like. Especially when you come up against a team as strong as this City side, who had Mahrez, Dias and Jesus on the bench.

There isn’t much to report on the game in all honesty. If you watched 10 minutes, then you watched the full 90. It was essentially a training game and the home team didn’t get out of second gear. They went 1-0 up on the stroke of halftime when Cancelo tore our defence open with a gorgeous pass to Sterling, who slotted past Pickford, and who also should’ve been booked for diving a few minutes before the goal.

Half time was the highlight of the game. Amstel on tap, not the best ale choice in the world but by no means the worst, and ten times better than what’s on offer at Goodison, and Jamie Oliver standard sausage rolls. They were incredible and I wish I’d bought two.

I’d pledged to myself before the match that if we went 2-0 down then I was leaving. Again, some of you may slag me off for being negative but to be honest, following Everton at the moment is more about the drinking and having a laugh with your mates than it is about the footy. So when Rodri lashed a rocket past Pickford I stuck to my guns and got off. The keeper can’t do anything about things like that but Allan definitely could have. Think we’ll swerve trying to explain that clearance.

I saw a tweet afterwards from an Everton fan saying that the away fans are poor because they don’t sing and aren’t very loud. When the team we’re following are putting out performances like that, and basically standing aside and allowing City to do what they want and not even trying to get stuck in, then it’s quite hard to think of what to sing. There is a wide range of different problems going on at Everton at the moment, but the fans definitely aren’t one of them. Okay, the home atmosphere is God-awful, but it’s been like that for years. Footy grounds in general, have become a lot quieter as the years have gone by, so Goodison isn’t all that bad all things considered.

It’s now two months since we last won a game of football and I don’t think any of us know who to blame or where the main problems are.

Benitez has obviously been hard done with the injuries to our three/four key players, so are the board to blame? Or is Benitez’ insistence on giving Rondon a game wherever possible over the exciting Ellis Sims to blame?

Or are the eleven players wearing the shirt to blame? Because a lot of them don’t look as if they’re arsed either.

Or has this problem been ongoing for the last 20 years and we’ve only just noticed it? Yes, we used to be a shoo-in for the UEFA Cup/Europa League but we’ve not won a thing in over 25 years. Have we all just learned to accept mediocrity? After all, I and so many others have never had it any different. We don’t know how it feels to taste success.

Radical changes are needed at the club. A massive overhaul of something, anything, because I hate to say it, but following Everton at the moment is becoming boring.

One thing I will say is that slapping a brand spanking new stadium on the docks is not going to change the way we play on the pitch or the way the club is being run by chairman and owner alike. Of course, it’ll be nice to have something new, but without any success since 1995, what difference does a new ground make, other than the fact it’ll be bigger? (and hopefully louder)

If you’re still reading, then I applaud you because this has been one of the most downbeat pieces I’ve ever written, but that’s the honest truth as to what being an Everton fan is like at the moment, but it won’t stop me from going. Everton forever. 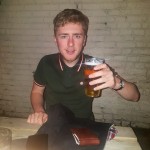